Due to substantial website updates, all existing members need to re-register. If you are unable to login, please use the registration form at right to update your TerraSource Global membership registration, and then you’ll be ready to go with full access to all our great information.

This local inventor’s machines served coal mines worldwide. Now a museum gets 2 of them.

The two crushing machines on the floor of the annex to the Bellevillle Museum of Labor and Industry aren’t that big or imposing, but they have been responsible for the livelihoods of a lot of Belleville people through the years.

People at the museum are thrilled to get the machines, donated by TerraSource Global, the company which sells the crushing machinery, still made in Belleville. TerraSource also has other lines of industrial machinery with a worldwide reach. 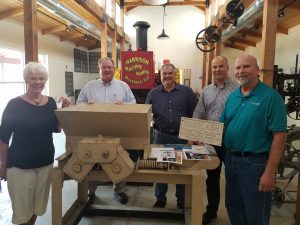 One of the museum’s latest acquisitions is a coal crusher, invented in 1948 by Theodore J. Gundlach, of Belleville, said Philip Schaefer, regional sales manager for TerraSource. Schaefer said the story is that Gundlach, who worked out of his machine shop, would go to mines to work on engines, and once someone told him he should invent a machine that would produce regular sizes of small coal pieces. So he did.

The Gundlach crusher was the first single-stage, two-roll crusher that could economically break 50-millimeter coal pieces into 19-millimeter cubes, so it wouldn’t get jammed up in automatic feeders, according to literature from TerraSource.

Schaefer said Gundlach would go to mines all over the area with his crusher in the back of an old truck, along with an old Ford tractor to power it. He would demonstrate how it worked so owners could see for themselves.

The other museum acquisition is a cage paktor, which sizes material smaller than one-quarter of an inch. It was developed by Gundlach in 1962.

Gundlach also developed other crushers for other uses, and his machines were at the mouth of mines and preparation plants around the world. They could be used to process salt, fertilizer, potash and a wide variety of minerals and materials.

Judy Belleville, a museum curator, said the equipment will help the museum tell the story of industry in Belleville. It will be part of an exhibit on Gundlach in the annex, alongside equipment from the Harrison Machine Works, including the museum’s Jumbo steam engine.

Jason Burlage, president of TerraSource, said it was really nice to have the machines in a museum, where they would remind people of the past and connect that past to the future of the larger company.