Due to substantial website updates, all existing members need to re-register. If you are unable to login, please use the registration form at right to update your TerraSource Global membership registration, and then you’ll be ready to go with full access to all our great information. 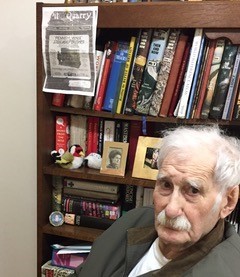 TerraSource Global is proud of the hundreds of years of cumulative innovation, quality and reliability that we are able to offer customers around the world through our three legendary flagship equipment brands (Jeffrey Rader, Pennsylvania Crusher, and Gundlach Crushers). We were reminded of this enduring legacy in an email our team received in the Spring from Mrs. Christine Dale of England, who wrote to see if we could help her answer a decades-old family-history question involving a Pennsylvania Crusher machine. We were intrigued.

As the saying goes, a picture is worth a thousand words. Mrs. Dale had a beloved photo of her late father sitting in his study, behind him a copy of the front page of a January 1925 Pit & Quarry magazine. Front and center of this issue is a Pennsylvania Crusher machine that Mrs. Dale’s great-grandfather Albert Euphrates Snelling helped design nearly a century ago. Though Mrs. Dale never met her great-grandfather Albert, her father and grandmother proudly shared stories of his life. Reflecting on these memories, Dale sought to find more information about what had happened to the Pennsylvania Crusher Company and the machine featured with her great-grandfather, which ultimately led her to TerraSource Global’s inbox.

Albert Euphrates Snelling, born in 1876 on a Romanian ship on the Euphrates River, grew up in Constanta. Snelling, a clever and driven man, chose to follow in his father’s footsteps and become an engineer. This ultimately led him to a role at Fraser and Chalmers Engineering Works in Kent, England, a company formerly associated with Pennsylvania Crusher Company.

Following a paper trail from the 1920s is not always the easiest of tasks. But, TerraSource’s Senior Director of Engineering Matt Richardson began digging through archives to find what he could about Snelling’s involvement with Pennsylvania Crusher. Through meticulous searches, he found that Pennsylvania Crusher would often license out technology and products to companies like Fraser and Chalmers, the company for whom Mr. Snelling worked, to collect royalties. In many cases, those companies would adapt the standard designs in order to better accommodate unique specific applications and markets. When relevant, Pennsylvania Crusher would often incorporate those designs and improvements into their future models. With this information in hand, Matt informed Mrs. Dale that it was very likely that Albert Euphrates Snelling was involved in taking a standard design and then modifying it for the UK and India mining operations, as indicated on the cover of Pit & Quarry photo. 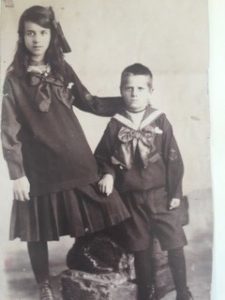 Although we aren’t able to track down the precise machine associated with Mr. Snelling in the photo, Matt determined that the machine was likely a version of a Dixie Fix Cage Hammermill. These machines had a long lifecycle, used up through the 1980s to crush materials such as limestone and cement. 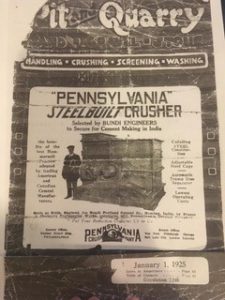 TerraSource’s technological capabilities have clearly advanced since Mr. Snelling’s designing days, but our company’s engineers still marvel at machines like the Dixie Fix Cage Hammermill that inspire our designs of the future. Looking closely at the magazine cover of the 1925 Pit & Quarry, you see words that continue to ring true for this TerraSource flagship brand even today:

Mrs. Dale hopes that when she makes her next trip across the pond to the United States, she will be able to make a stop in Belleville, Illinois, to see our manufacturing facility firsthand and be immersed in an environment that was in part inspired by her great-grandfather.

Do you have a similar story? A machine that’s been in operation for over 20 years? We want to hear about it! Email us at info@terrasource.com or fill out this survey (https://www.surveymonkey.com/r/W6HNZ2X) to receive a TerraSource T-Shirt and enter our TerraSource’s Oldest Machine Challenge with a chance to do a catered lunch hosted by a TerraSource team member.

We can’t wait to share more stories about what has kept the brands of TerraSource Global top-of-mind for so many years.